Numerous objects that launched decades ago are still in Earth orbit and can be observed in the night sky as if they were fossils of space history. There are objects from the 1980's, 1970's and even the 1960's, ranging from old weather satellites to long-retired rocket-types. Photographing such an object always brings a great load of fascination, especially if you realize that the imaging technique required to photograph a satellite or a rocket with a (backyard) telescope from the ground wasn't even available at the time when those objects were launched into space. It is also exciting to await what the objects look like on the images and whether there is even some detail visible. Accurate interpretation of the images can sometimes be difficult.
A very special observation of the in the 1970s in Earth orbit lost planetary probe Cosmos 482, is presented on the page Lost Planetary Spacecraft.


The Agena-D rocket upper stage is best known from the NASA Gemini-era as the Agena Target Vehicle (ATV). In 1966, Neil Armstrong and David Scott performed the first ever docking of two spacecraft in orbit with Gemini-8 and the Agena. The Agena rocket in the picture is pretty much the same type as used for the Gemini flights but without the docking adapter and in its original configuration. On January 19, 1964, a Thor Agena D SLV-2 rocket lifted up from the Vandenberg SLC2W complex with the two military satellites OPS 3367A  (P-35-6 / DAPP 6) and OPS 3367B (P-35-7 / DAPP 7).DAPP = Data Asquisition and Processing Program.Their purpose was probably to test military spaceflight technology. Later it became clear that these were TIROS - derived weather satellites for the National Reconnaisance Office (NRO).The two satellites were released at an alititude of around 800 kilometers. Exactly at that altitude we find the old spent Agena upper stage from this launch. Thanks to the considerable altitude, it is still in orbit after 50 years. I captured the Agena in September 2011 with a 10 inch telescope. The image, taken over more then 800 km distance, shows surprising details such as the varying thickness over the full length and even a sign of the rocket engine can be recognized at the thinner end.

Two other, average frames, of this imaging session show comparable detail and shape and confirm the detail. Note the thicker upper part
of the rocket body and the transition to the narrower lower part which is visible in both frames and the more detailed image displayed above.

The Meteor satellite series was developed in the Soviet Union during the sixties. It was preceded by Cosmos-44, an experimental weather satellite launched on August 28, 1964 which transmitted TV images of cloud cover. I also photographed the rocket upper stage of this Cosmos 44 launch, see elsewhere on this page. On March 26, 1969, a Vostok rocket launched Meteor 1-1, Russia’s first fully operational weather satellite, into orbit. With a mass of 1200 to 1400 kilograms, a length of 5 meters and a diameter of 2.5 meters, the Meteor 1-1 spacecraft was originally placed in an orbital altitude of 650 km. Two solar panels were automatically oriented toward the sun to provide the spacecraft with the maximum amount of solar power. Meteor 1-1 used a gravity-gradient triaxial stabilization system to orient towards Earth. Onboard the spacecraft we find two vidicon cameras for dayside photography, a scanning high-resolution infrared radiometer for dayside and nightside photography, and an actinometric instrument for measuring the earth’s radiation field in the visible and infrared regions. The instrument are located on the side of the satellite pointed toward the Earth, while the solar sensors are mounted in the top section. The successors of the Meteor 1-1 included the Meteor 2-2, Meteor-Priroda, Meteor-3, and Meteor 3M. The Meteor-M 1-2, the last of the series, lifted up onboard a Soyuz -2-2b rocket in 2009. The design didn't change much over the years.

On June 2, 2011, I obtained relatively clear images of the spacecraft, sufficient to show the solar panels and to make it possible to distinguish the thinner from the thicker end of the cylindrical satellite body. These images were taken from a range of about 425 km. Despite 43 years in orbit, at the time the Meteor-1-1 satellite was still flying at a ‘safe’ and stable altitude of around 400km.In March 2012, 9 months later – I found the spacecraft in a very low Earth orbit of around 250 km. Its orbit seems to have lowered  quickly in the last months, and when I took the images on March 20, reentry was predicted to take place around March 25. At the time of writing, the reentry is estimated to happen a few days later. The satellite appeared near the Southern horizon  and moved to an altitude of 80 degrees toward the North-Northeast with the expected high angular speed. During the first part of the trajectory, the satellite appeared relatively steady, but its brightness dimmed very quickly just before culmination, brightening up again at the point of culmination. These are typical signs of low rate tumbling. Indeed, the frames captured show clear signs of tumbling motion of the elongated satellite body, with an alternation of the long side and the short side of the spacecraft’s body. The moments of minimum brightness correspond with visibility of the short side. The best images from this session show a surprising amount of detail of the satellite and its solar panels.

On March 21, one day later, I observed the spacecraft again, this time about 20 degrees lower through the Southeast. This time, it was easy to see it  with the naked eye as an object with a similar pattern of brightness variation. According to data provided by the astronomical calculator Calsky, the satellite  sank  5 km in altitude during the last 24 hours. Soon, another monument of spacecraft history will reenter the atmosphere after spending 43 years in Earth orbit.

Very detailed images taken on March 20, 2012 and showing Meteor 1-1 in a very low Earth orbit, just 5 days before reentry. The shape of the satellite is very well recognizable now

Vostok 8A92M  Rocket for Cosmos 44
This set of images shows an old upper stage launched in 1964, which brought the first legendary experimental Meteor weather satellite, cosmos 44 into orbit. This was the test satellite for Russia's real first official weather satellite Meteor 1-1. The other interesting thing is that this was the first launch of the Vostok 8A92M rocket. The upper stage is only 2,56 x 2,84 meters small, and the distance was 760 kilometers. Considering the size and the distance, this object is transformed into an unresolved small speck of light, even in a high resolution image. Further data on the image.

The oldest satellite I ever photographed is Tiros 2, an early US weather satellite. Tiros (Television Infrared Observation Satellite) was the first Earth remote sensing satellite. 10 Tiros satellites were launched between 1960 (Tiros 1) and 1965 (Tiros 10). In 2008 I was hunting for Tiros satellites and in  September 29, 2008, I finally managed to capture Tiros 2 that launched in the same year as Tiros 1 (1960) on a Thor-Delta rocket. As expected, the small round satellite was visible as a small round speck of light on the frames. For me as an astrophotographer with a huge interest in space history, it was an amazing feeling to have captured an object from the early years of spaceflight. On October 16, 2008, my Tiros 2 image was featured as APOD 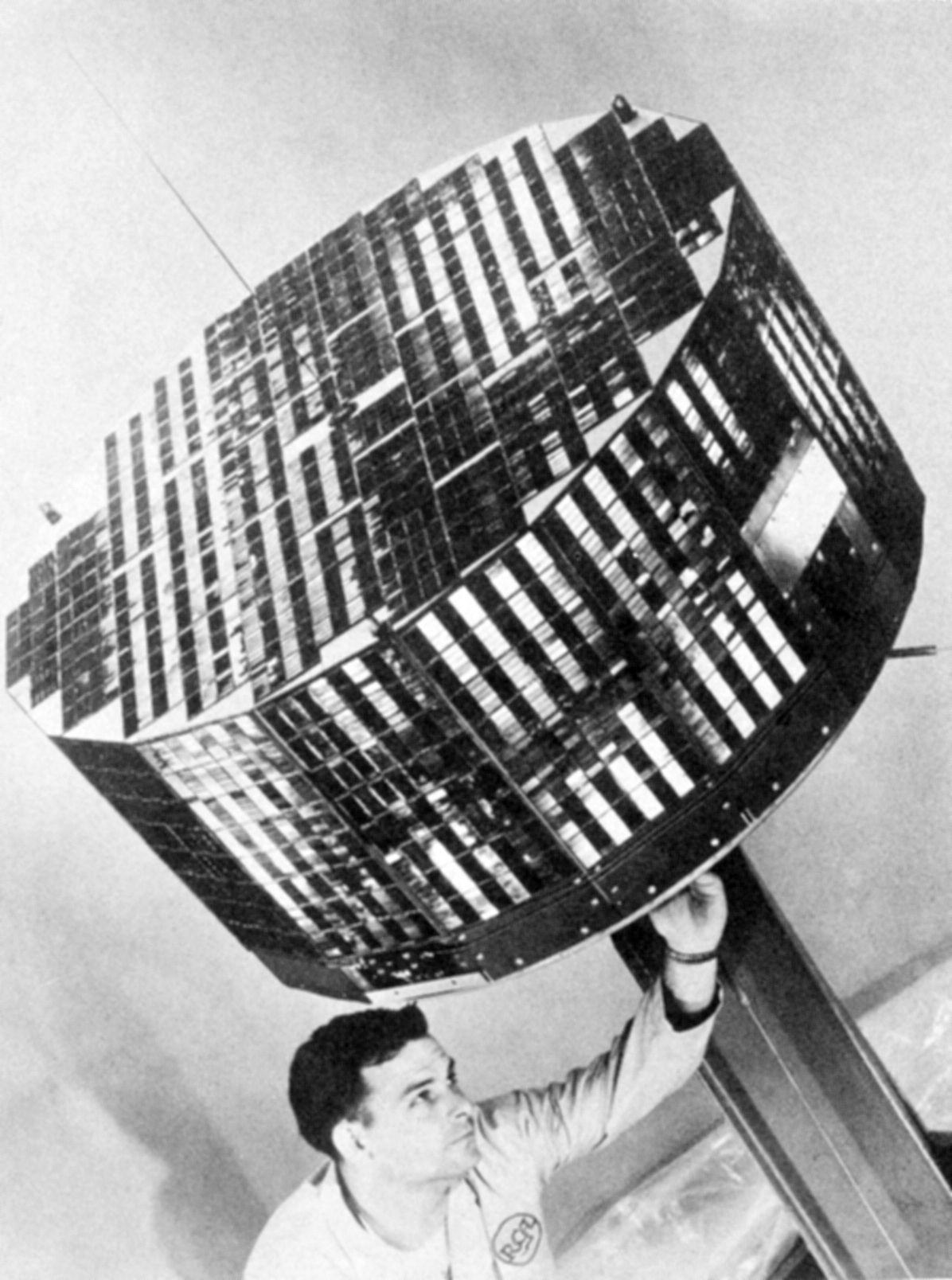